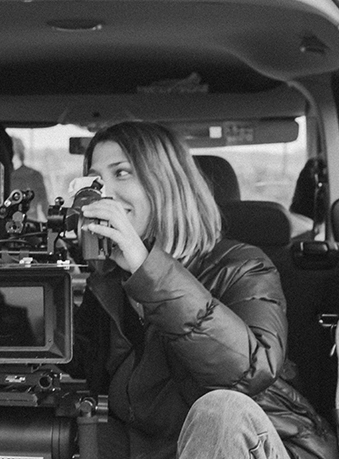 Eleonora Contessi (1996), Director of Photography graduated in 2016 from ISFCI where she develops a visual sensitivity that will bring her closer to the world of cinema. She thus graduated in 2019 at Centro Sperimentale di Cinematografia of Rome, the starting point for various collaborations with directors, with whom she makes videoclips and short films.
Among these “Gas Station” by Olga Torrico, shot in 35 mm, which wins the award for Best Technical Contribution to the Critics’ Week of Venice 77 in 2020, “Happily Ever After” by Domenico Croce in competition in 2021 at the Giffoni Film Festival, and lastly at the end of 2021 she shoots her last work in 35mm “Tria” written and directed by Giulia Grandinetti. In 2022 she received the Kinéo award assigned in the context of the 78th Venice Film Festival, as the best emerging director of photography. Since 2019 she has been the editor together with Camilla Cattabriga and Claudia Sicuranza, of an art magazine that talks about light: Eki Magazine. 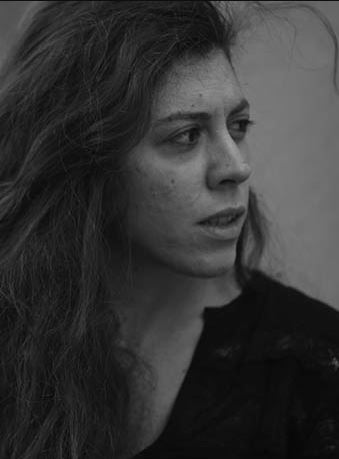 Veronica Spedicati graduated from the Dams in Roma Tre with an experimental thesis on cinema made by deaf people and in 2013 she won a scholarship at U.c.l.a. from Los Angeles to collaborate on a research project on non linear storytelling. In 2015 she shot the short documentary “La Prima”, focused on the story of a deaf girl and in 2016 she was admitted to the triennium of directing at the Experimental Center of Cinematography in Rome. In 2018 her short film “Il Giorno della Patata” entered the competition in the Rome Film Festival in the Alice nella Città section and in 2019 his diploma short film “Il Nostro Tempo” was a finalist at the 34th International Critics’ Week in Venice where she won the prize to the best direction. 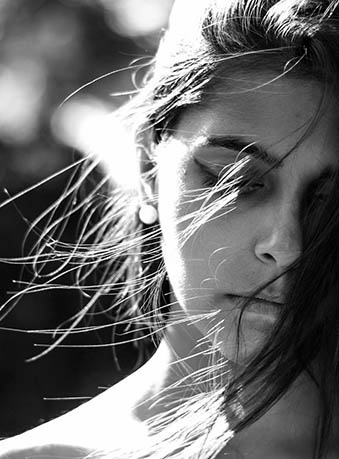 Giulia Di Battista was born in San Benedetto del Tronto on June 1, 1992. With her first short film, a documentary entitled “Rèsce La Lune”, she entered the Center Experimental of Cinematography of Rome, 2016-2018, directing course. With “Rèsce La Lune” she has also participated in more than 30 festivals around the world, winning a dozen awards including the best short film at the ICFF in Toronto (2016), “Most Moving Film” at the Sczcecin European Film Festival ( 2016), best short film and best screenplay at the Aqua Film Festival (2017), best short film at the Fluvione Corto Festival (2017) and best documentary at the International Tour Film Festival (2018). With the subject “La Barbaresca” she won a special mention at the Valeria Solesin prize. With her short film Cento Metri Quadri in 2019 she participates in the Schools Without Borders section of the Locarno Film Festival and in other festivals such as the RIFF and Corto Dorico. Also in 2019 with “Tomorrow at dawn”, graduation short film, she wins the Fano Film Festival, the FEDIC prize, the festival in short festival and participates in the prestigious Energa CamerImage festival. Also at CamerImage she is selected for the Talent Demo Program, receiving the opportunity to develop a project with film experts such as Jordan Roberts, Teresa Medina, Gabriela Rodriguez. 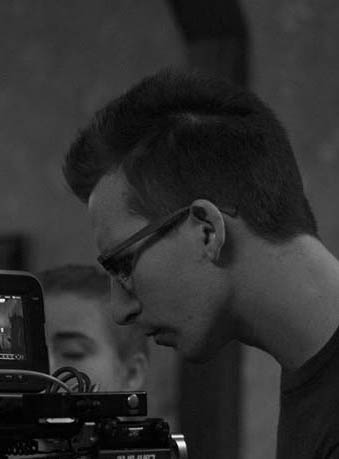 Marcello graduated in Philosophy at the Sapienza University of Rome, with a thesis in Aesthetics on ability paradoxical for the human being to found orders and open up to the uncertain, through a dialogue between the first and third Kant’s Critique, the neuroscientific theory of simulation embodied and the cinema and poetry of Andrej Tarkovskij. After his studies he started working as a screenwriter and author at the Augustus Color. In 2017 he stopped this collaboration to co-found Artchivio, the house of production and creative collective based in Rome. With Artchivio he conceived, curated and presented the Proietta Archive, a bimonthly event thanks to which more than twenty directors have been able to project their own short film at presence of industry professionals, producers and distributors. Also with Artchivio he produced and organized The Ziqqurat Case, the puzzle series directed by Fulvio Risuleo recognized by the press as the first interactive series made in Italy. In 2019 he left the position of producer in Artchivio in order to resume his authorial path and dedicate hisself entirely to it. 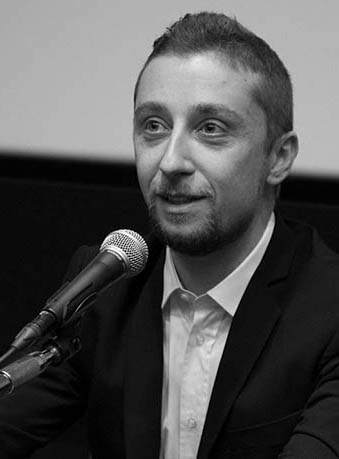 Toni Trupia was born in Agrigento on May 6, 1979. In 1996 he moved to Rome where in 2001 after various experiences in cinema and television, he begins to attend the directing course at the Experimental Center of Cinematography. In 2003 he was assistant director of Mario Monicelli for the short film “L’appello di un amico”. Among his subsequent works “Fazzu tozza e jettu ‘o ventu” (2001 – Arcipelago 2002), “La morte del vecchio” (2002 – Taormina Film Festival; European Film Festival), Za La Mort (CortoLazio 2003), Tita (Anteprima Spazio Giovani – Torino Film fes]val). “Cari amici vicini e lontani” (2004) is his diploma essay and have been released in cinemas . In 2005 he was assistant director to Michele Placido for the film “Romanzo criminale”. “L’Uomo Giusto” (2007) is his first feature film. He is teacher of direction at Nuct – Scuola Internazionale di Cinema e Televisione di CineciSà e alla Scuola Sentieri Selvaggi. He is one of the authors of the screenplay for the film “Vallanzasca-Gli angeli del male”, directed by Michele Placido and played by Kim Rossi Stuart. On November 29, 2012, “ITAKER – VIETATO AGLI ITALIANI”, his second feature, distributed by Cinecittà Luce. It is among the authors of the screenplay for the film “7 minuti”, diretto da Michele Placido. In 2017 it came out in the the documentary film “Ero Malerba” goes up (Special Mention to the Nastri d’argento and winner of Unicredit Pavillion “Visions from the world”). He is currently working on the development of his new movie “La primavera”. 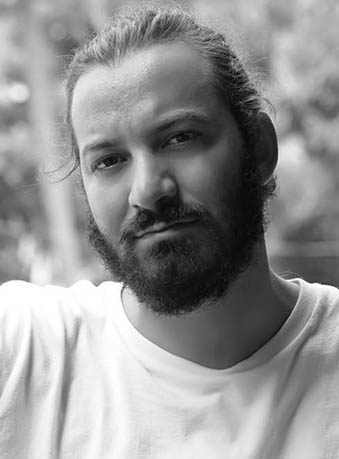 Tommaso Santambrogio is a film director and artist with international experience. He graduated with honors in economics and management for art, culture, media and entertainment at Bocconi University, studied for short periods at academies such as the EICTV of Cuba, the Experimental Center of Cinematography in Rome, the Raindance Institute in London, the Visconti film school in Milan and participated in the Farecinema academy in Bobbio. He participated in the 74th Venice Film Festival as judge of the Venice Days section. He worked in advertising in Milan and Rome, in production in Paris and as a filmmmaker in Cape Town, and then devoted himself entirely to cinema. He made his first micro-budget short film, D’istanti Lontani, set between Milan and Paris in 2016 and experimental, and then made the second, “Escena Final”, in the Amazon in Peru with the support of  the Peruvian Ministry of Culture and with the collaboration of the world-renowned director Werner Herzog. His third work is Los Océanos Son Los Verdadores Continentes, presented in world preview at the Venice Critics’ Week where he won the prize for best photography and made in Cuba in 2019 with the collaboration of the Filipino director Lav Diaz. He has worked as an assistant director and in the photography and production department on different Italian (Il Diavolo, Quasi Natale etc etc) and international films (he has just finished working on the new film by Lav Diaz, Tagsibol, shot in summer 2019 in Philippine). 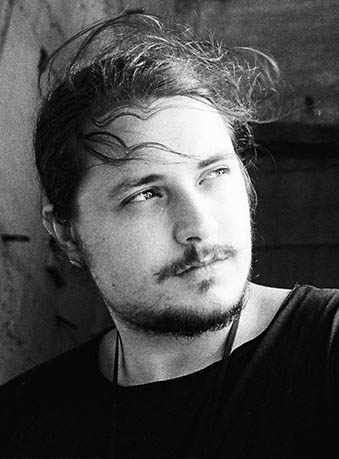 Alain Parroni was born in Rome, 1992. He made his debut by co-directing one of the episodes of the animation picture AETERNA. In 2015, Stefan Seigmaster, graphic design guru, is persuaded by him during the RUFA Contest and offers him a job interview in New York, who will help him grow in the visual art field and to live a period in the Big Apple. From 2014, he researches and realizes different products, together with the THREEAB team, born in the Rome University of Fine Arts, being recognized with many awards, like “Best Direction” for the short film DRUDO in the 48 hours film project 2015, winning piece in the Atlanta Filmapalooza 2016, and finally a special mention during the appointment of roman “nastri d’argento” 2016 for the short film “IL MIRACOLO”. In 2016, the jury of RUFA contest 2016, chaired by canadian designer Karim Rashid, rewarded him for an experimental project on the spaces where he grew up, made in VR. In the same year he presented the IOV short film at the Rome Film Festival in the “Alice nelle Città” section, a short film in which he was involved in the meticulous reconstruction of an Arctic environment, treat, the film, the shipwreck of the ITALY airship at the north pole, in the laying theater and will win first place in the “ITALIAN CINEMA NOW” category of the Venice Film Week. In 2017 he graduated with 110 and was honored in the Arts of Cinematography at the Rome University of Fine Arts and his short film ADAVEDE is presented at the 74th International Venice Film Festival in the International Critics Week and selected in competition at the 59th edition of the Zinebi International Bilbao Festival. In the same year, in the early months he began to attend the Regia course at the Experimental Center of Cinematography in Rome and to work as Street Casting at Indigo Film s.r.l. for the film LORO by Paolo Sorrentino. 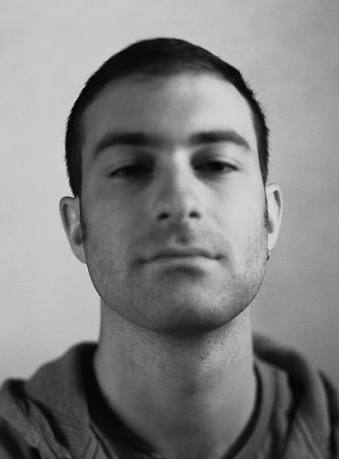 Tommaso Frangini (1993) is a young Italian director. He holds a Masters in Film Directing from the California Institute of the Arts – CalArts, in Los Angeles. In 2016 he followed director Andrea Pallaoro as a personal assistant in the film Hannah, for which Charlotte Rampling won the Coppa Volpi at the Venice Film Festival. He then made some short films, selected and awarded in numerous international film festivals, including “Finis Terrae”, presented at the Venice Film Critics’ Week in 2020. 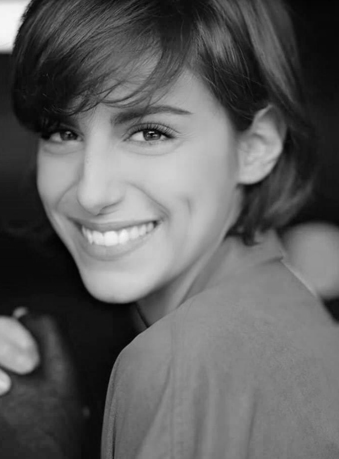 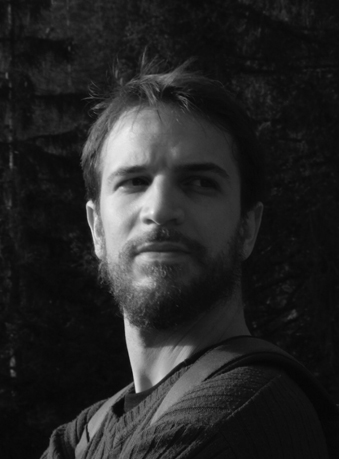 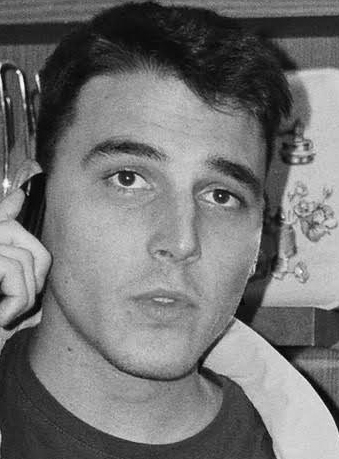